ARE YOU AN ANGEL PARENT? 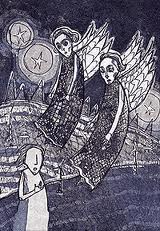 It would seem that something which means poverty, disorder and violence every single day should be avoided entirely, but the desire to beget children is a natural urge.

Diller knows and she also knows there are no angel parents living among us mortals.   Parents are neither angels nor the devil as is so often portrayed in today’s media.

Since the 1960s too many parent advisors have touted things like “Siblings Without Rivaly” or “How to Talk So Kids will Listen” or “How to Raise an Emotionally Healthy, Happy Child.”  Mostly this trend started with Thomas Gordon who wrote the best selling parent education book “Parent Effectiveness Training.”  He didn’t stress happiness, but that parents could enjoy stress free parenting — peace on earth or at least in the home — a false promise that laid a guilt trip on most parents.

Gordon’s general thesis was that  parents should become a child’s therapist.  Essentially, he said parents should avoid doing any of the 12 following  things:

It still boggles my mind that his advice has become almost the standard for child rearing.  I think it also has made parent bashing much easier.

The only parents capable of not doing all of the above are those whose children are being raised elsewhere, by someone else, or who people are true angel parents, living in heaven and being idolized in absentia.

Parenting, particularly in a culture that encourages parents to be a master of all — to overwork, and to keep children happy — is probably the most frustrating job in the world.  Fortunately, for many it is also the most rewarding.

Expecting parents can teach values without conflict is one of the saddest delusions put forth by parent advisors.

To be fair, Gordon’s advice was not quite as simplistic as the above sounds. Moreover, it is good advice for parents of teens.  Teenagers are super sensitive to being controlled so do best when parents stop trying. All 12 of Gordon’s don’ts are control strategies and they are good advice, providing parents have instilled healthy values.

Teaching values means using every tactic Gordon says not to use, at least until your child becomes an adolescent.  It means being seen by your children as bad, mean, nasty, wrong, or just plain hard-hearted much of the time.

What’s a parent to do?  Don’t despair. Being capable of standing a child’s anger is part of every parent’s job description.  It helps to remind yourself of that at least twenty times a day.

You do have to live the values you want your child to live. Children learn by imitating and modeling what others do. So living your values is a biggy.  It is also a hard one, for most parents want their children to do better then they did.  I certainly wanted my children to profit from the lessons I learned blundering my way to who I have become.

My mother, now an angel mother, but not always angelic when raising me, had some stock phrases she repeated over and over.  Here are three.

At some point, probably as a teenager, I hated hearing these.  Then when I began writing my blog I  realized how these four statements became part of my value system.  My translations include:

My kids still put on the “Oh-mother-face” when I put these phrases into play.  That does not mean they haven’t heard and made them their own.

One of hardest things about being a parent remains not seeing the results of  some efforts for years.  Meanwhile,  practice gratitude for the good times, create more good times than bad, be as patient as you can, endure the tough times, forgive, hope to be forgiven,  and love as hard as you can.

Practice kindness: Share if you know someone who might find this helpful.  You will strengthen them, help me, and because  kindness always  circles back, strengthen you. Stay strong and keep caring.