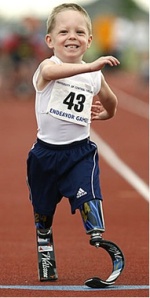 BE AWED, I WAS.  I WAS ALSO REMINDED TO BE GRATEFUL that my kids and grandkids have all their fingers and toes, arms and legs.  You can read more about Cod here here and also at Go Cody.

Obviously, Cody has great parents.  And great medical care.  Kudos.  Parents matter and good parenting can make a difference in how a child handles life’s blows.  And so does access to good medical care.  Think of Cody having been born impoverished in a poor country.

Mother nature also has a part to play in Cody’s awesome adjustment to being leg-less.

When a child’s brain is getting its first programming, whatever is, becomes normal.  This lasts more or less until adolescence.  With adolescence comes the ability to think beyond what is and to do so realistically.  Until then the child’s desire to be all he can be holds sway.  Limitations are not seen by the very young as limitations, or mourned in quite the same way as when the ability to code reality begins.    This protects children from many life blows until the realities of their life hits home.

There is a down side.  If normal is abuse, the child expects abuse and also comes to think abusing is okay.  That, however, is a subject for another day.  So back to Cody …  his view of normal doesn’t mean he  isn’t aware that other kids have legs and he doesn’t.  That would be psychotic.  However, kids live in the moment and with the philosophy “It is what it is.”

His parents also accepted what was and didn’t “awfulize,”  That is Albert Ellis’s term for making things worse with hand wringing.  It applies mainly to making mountains out of mole hills, but also applies here. Cody’s parents obviously took the healthy route, “You don’t have legs, so live with that, but live as completely as you can.”  That attitude has been a major part of Cody being able to be who he is.

Now come adolescence. Cody will have to go through a mourning process.  I could not find anything about Cody now. I emailed his parents asking, but heard nothing. I have no idea if Cody is even a live.  If any of you know, do let me know via a comment.

My most hopeful fantasy was that as Cody reached adolescence, he asked his parents to stop making him a poster child.  This would mean, his thoughts have moved to a new level. Being leg-less has a very different meaning to an adolescent than to the young child you see in the picture.

I wrote an article about that aspect of adolescence.  You can read it here. The article specifically discusses the problems some foster and adopted children deal with when the adolescent brain changes and lets them think more broadly about what might have been. The basic theory applies to all adolescents.  I remember when I was caught in adolescent angst, mourning the fact that I wasn’t adopted.  I was sure my life would have been better with a different set of parents.

I suspect, Cody’s parents “Can do” attitude will help him do better than most. Which brings me back to one of my rants.  We make too much of keeping our children happy rather than providing them with tools to keep them emotionally strong.  Also, as Cody’s parents have made it clear, they were not alone.  A great medical team was there for them and Cody.

What’s a parent to do?   All children should be encouraged to make the most of all they have. Hurts, including differences should not be ignored, but parents do best by adopting a philosophical attitude and encourage the child who falls to get up and go on.  Once children see the hurt, it can be acknowledged, but the question  “How can you move beyond this hurt?” needs to be part of the conversation.

Get expert help for every aspect of your child’s challenge and that includes competent psychological counseling.

Keep caring, keep sharing,  it works. Share this if you know someone it will strengthen.

Like Loading...
This entry was posted in Special Kids/Parents and tagged adolescene, adoptive parents, Challenged Children, foster parents, Go Cody, Katherine Gordy Levine, Parenting advice, postaday, special kids, The Changing Thoughts of Adolescence, Thinking about what matters, What is a parent to do.. Bookmark the permalink.